Creation of the County
Muscatine, seat of Muscatine County, first came into existence in the summer of 1833 when Colonel George Davenport of Rock Island, Illinois, sent three representatives into the territory to set up a trading post. That same year, James W. Casey and John Vanatta stopped at the outpost. Here Casey’s “woodpile” stocked the steamboats providing access to the frontier, opened June 1, 1833, by the Blackhawk Purchase, and gave the settlement its first name of “Casey’s Woodpile”.

In May 1836, a surveyor was engaged to survey a town and when the first plat was made, the name of Newburg was given to the town, which was soon discarded and changed to Bloomington. The population then was 71. 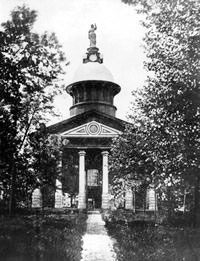 The first public land sale was held in Burlington in November of 1838 and Muscatine County reserved the quarter section on which the courthouse stands paying the Federal Government $1.25 per acre. On December 24, 1839, the commissioners met to receive bids for the construction of the first courthouse. After examination and investigation of seven proposals, the contract was awarded to William Brownwell and William Hassinger. The size of the building was to be 50 X 60 feet with a 10-foot wide portico across the end.

The walls were to be 30 feet in height from platform to wall plate. The height of the ceiling was to be 12 feet on the lower floor and 16 feet 9 inches on the court room floor. The foundation of the courthouse was to be of hammered stone, outside walls of brick, thickness of walls twenty inches. The original contract price of the building was $11,500, which was materially increased before the building was entirely completed. The contract called for the completion of structure on or before September 1, 1841.

The town referred to as Bloomington was originally incorporated in 1839, but the name led to confusion. Frequent miscarriages of letters by mail occurred because there were towns of the same name in Illinois, Kentucky, Missouri and Indiana. Also, postmasters for Bloomington sometimes mistook Burlington. On June 7, 1849, the town’s name was changed from Bloomington to Muscatine. The name of Muscatine is of Indian origin, derived from the Mascoutin Indians, a war-like tribe, who had been driven westward across the Mississippi and settled on a large sandy bottomland encircled by a slough just south of the present site of the city. This area is now known as the Muscatine Island. The name Muscatine is unique in that it is not used by any other city in the United States, or so far as known in the world.

The first jail was ordered built in January 1839 on the Northwest corner of the public square. The “old” jail that stands across Fourth Street from the courthouse was built in 1857. It is listed on the National Register of Historic Places, as is the courthouse. The “old” jail was replaced in 1907 at a cost of $15,000 for the building and $6,000 for the steel cage and fittings. On November 6, 1990 an 8.5 million dollar bond issue was passed to fund the construction of a new jail on Walnut street west of the Courthouse and Old Jail. The new state of the art jail was dedicated July 5, 1996.

A Civil War Veterans Memorial, dedicated in 1875, is located on the southwest corner of the courthouse square. The figure of a Civil War soldier in full field equipment stands at parade rest, atop a fluted column 30 feet high. Be sure to notice the cannon on wheels on the Southeast lawn. This is a Gunfield, 6 pounder, Bronze, smoothbore made in 1857 by Cyrus Alger & Company, Boston Massachusetts. The mortars, mounted on cement pedestals on the Southwest lawn are Howitzers, Siege 24 pounder, made in 1849 by Cyrus Alger & Company.

They are pointed South…and not by accident! If you visit some older courthouses in the South, you will find their cannons pointed in the direction of us Yankees! Prior to World War II, the cannon on wheels was wheeled down to the vicinity of the Muscatine Power Boat Club on the river front each Fourth of July. The cannon was stuffed with wet newspapers instead of ammunition and fired up Sycamore Street by the cannon crew as part of the annual celebration. An All Veteran’s Memorial to honor all Veterans was placed next to the cannon on wheels and dedicated on Memorial Day, May 25, 1998.

As for industry, Muscatine became a stopping place on the Mississippi River and assumed importance as a lumbering center, maintaining this position for years. In 1890, the manufacture of pearl buttons began to supplant other industries. Fresh-water clam shells, instead of animal horns, made a stronger button that more closely resembled the fashionable buttons made of expensive import marine shells. Muscatine soon became the world’s largest pearl button manufacturer, its factories employing half of the Muscatine workforce during the turn of the century, earning it the name of “Pearl Button Capital of the World.”

Muscatine’s pearl button industry opened the door for other vital industries which soon followed: H. J. Heinz Co., Stanley Consulting, Inc., Grain Processing Corp., HON Industries, Carver Pump Company, Bandag Inc., Musco Sports Lighting, Bayer CropScience LP, IPSCO, North Star Steel, Communication Data Services and West Liberty Foods, just to name a few. The Muscatine Island, found south of Muscatine, is known for its sandy soil, which was once an actual island that became farmland when the Mississippi River changed its course. The Muscatine Island with its 30,000 acres of rich bottom land has been known in the markets throughout the Midwest and east for its sweet corn, cantaloupes, watermelons, potatoes and tomatoes, with the famous Muscatine Melon being perhaps the most recognized.

Note About This History

The above history was compiled from several sources and does not include all history available on Muscatine County. More detailed information may be found at the County Auditor’s Office, Musser Public Library, and the Muscatine Chamber of Commerce.
Notify Me®
Employment
[]